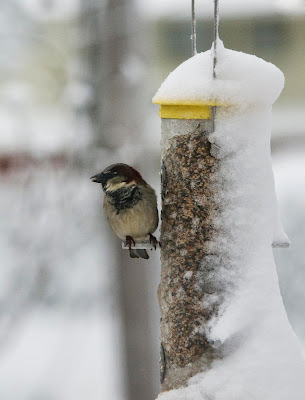 I've lived in Northwest Indiana for most of my life and one sure thing everyone learns about living here is that the weather is always going to change. Especially in February!

Last weekend, we enjoyed the most beautiful sixty degree Saturday.  The sky was blue, the birds were singing and the hiking trails were calling my name. Today, a mere five days later, we awoke to a world completely transformed into a scene from a holiday Christmas card.   Twelve inches of heavy wet snow (my snow shovel-wielding husband swears it's more) started falling last night and didn't stop until this morning, causing every bush and small tree in our yard to bend in graceful arcs and travel to be perilous. 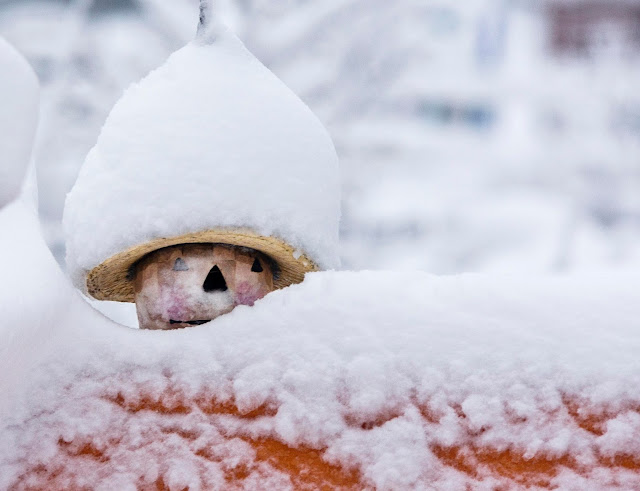 After we heaved a deep sigh and finished clearing off not only our driveway but the neighbors, as well, it was hard to ignore just how beautiful the world had become overnight.  The birds had managed to find access to their seed in the feeders, and were amicably sharing their grub with a local squirrel.  My scarecrow bird house was smiling out from under the hat Mother Nature redesigned for him. There were patterns everywhere and everything had become simpler, cleaner, quieter. 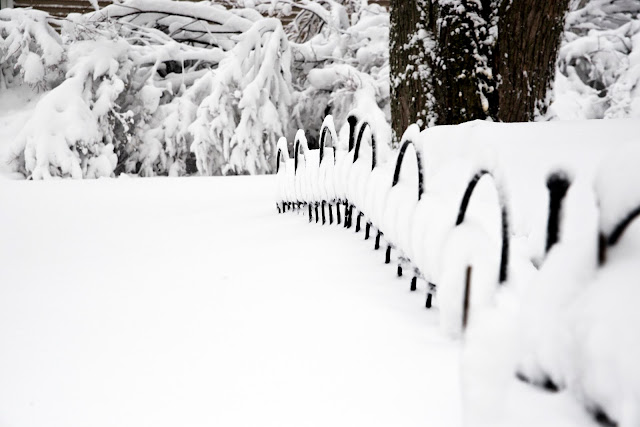 I banished our lab mix, Cooper, to the house, much to his 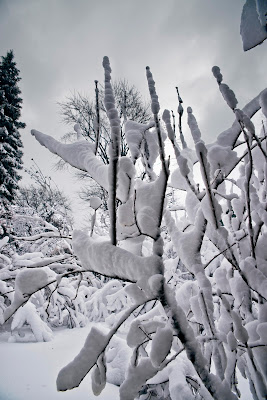 displeasure, because I wanted to experience the peaceful
landscape untouched.  I have to admit I wasn't really
dressed that well for carefully trudging through wet
snow up to my knees.  Cold and wet were soon forgotten,
however, once I began to explore all the fascinating
creations the snow had made in my backyard.  There were graceful arcs and soft pillows; bushes taking a bow to stately maple trees whose bark was all speckled with bits of snow.   There were stick branches reaching to the sky with snow shaped by the wind winding around them like ribbon candy.  The sun tried to make an appearance for a few moments but its hazy glow gave way to clouds again in short order.

Finally, hearing a jingling behind me, I turned to find
Cooper poised at the edge of a snowbank.   He had waited long enough for his own way of enjoying this February gift.  A quick call of his name was all it took to have him bounding through the drifts, around the garden, in and out of the beautiful formations.  Of course, he could do this for hours, and so could I. 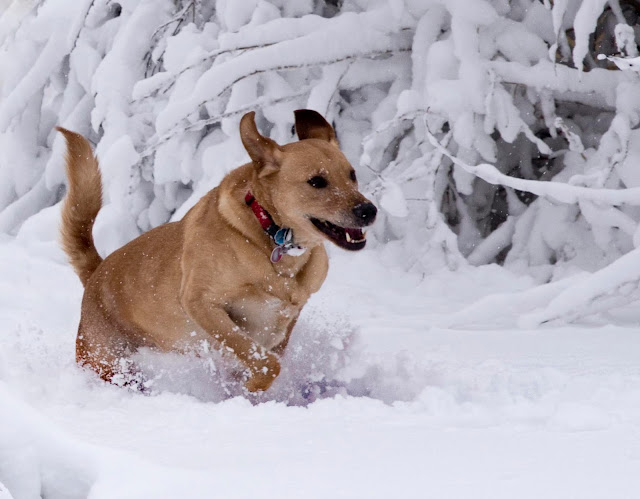